Wiring up and Testing Batmon Boards

Okay, it's time to get your wiring spaghetti on. I spent part of last evening (after fixing the speedo) and all of this morning wiring up the Batmon boards. In the process I blew the OVP channel on the IsoBatMon unit. 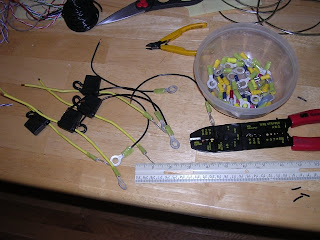 Here I'm crimping yellow 3/8" ring terminals on all the blade fuse holders that will hold the 7.5A fuses. I tried to do as much as I could on a workbench instead of in the cramped quarters of the car. 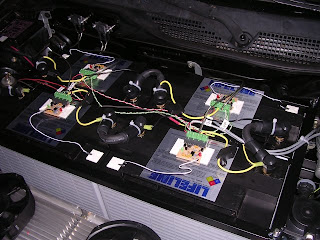 Okay, I've finished wiring up the front set of batteries. If you look closely (click picture to zoom in), there are the two grey LVP/OVP cables on the right side of the picture. The two thinner red/black paired wires in the upper left of the photo are the LVP/OVP signals going to the two front batteries. 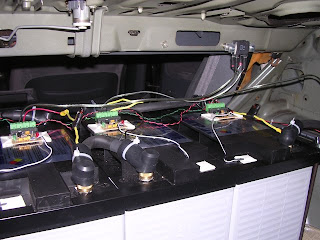 Here is the finished Batmon wiring in the rear trunk, showing the speaker wire going to the shunt resistors and the twisted, colored computer wires connecting the LVP/OVP signals between the boards. 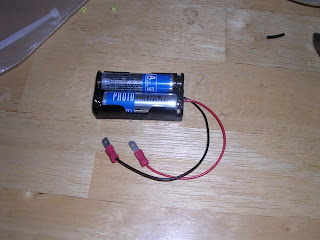 I came up with this little device to test all the Batmon boards. It's basically a 3V supply with 2 AA batteries and spade terminals on the wires. The spade terminals are smaller and much thinner than your standard 1/4" fast-on terminals. This enables them to slide easily into the fuse socket without much entry or removal force.

How does it work? Instead of plugging in the fuse, you plug this 3V supply in to the fuse sockets in both directions. In one direction, it adds 3V to the 12V battery supply, making 15V which triggers the OVP circuit. In the other direction, it subtracts 3V from the 12V supply, making 9V which triggers the LVP circuit. With this, you can verify that both Batmon circuits are working AND you can check the red and green LEDs on the IsoBatMon board to make sure this board is properly talking to it. 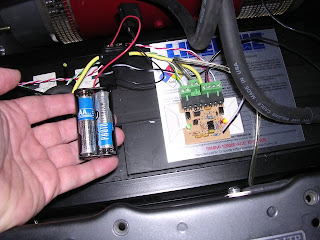 Here's the 3V tester in action. I have the red(+) side plugged into the left side of the fuse holder which is tied to the +12V of the battery. The black(-) side is plugged into the right side of the fuse holder, giving the BatMon board 9V. It's hard to see due the camera flash, but the red LED on the BatMon board is lit up, showing that the circuit works. The red LED on the IsoBatMon board has also lit up, indicating a proper connection back to the main system.

While working in the trunk, I briefly touched one of the OVP signals to a battery terminal and fried the OVP side of the IsoBatMon. The BatMon board itself works, but when it's opto-isolator shorts out the master OVP pair running through the car, the green LED on the IsoBatMon fails to light.

Since the IsoBatMon is powered from a battery "low" in the pack (around 12V), touching the OVP signals (or LVP signals for that matter) to any battery terminal "high" in the pack (say, 96V) will send a high-voltage, high-current spike through the opto-isolator (and LED) on the IsoBatMon. Kerplooey!

I'm going to see if I can work with Bryan from Belktronix to fix this. In the meantime, I'm going to short the OVP signals coming OUT of the IsoBatMon together to force the charging system into low-current mode to prevent overheating any of the shunt resistors.