I finally got to trying out some filtering on the PakTrakr lines today with some pleasing results. I've read several places, that the PakTrakr signal line really needs a 0.1uF capacitor across it to deaden out any extra noise. My series 100 ohm resistor that helped on my previous EV didn't work this time. 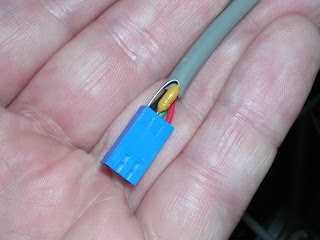 I found a tiny 0.1uF tantalum capacitor at work. After bending one lead back on itself and cutting off the excess wires to leave 3/16" sticking out, I simply jammed the two leads into the rear end of the blue plug that attaches to the PakTrakr module. I'm hoping that the pressure between the plastic case and the metal pins will be enough to hold the contact. 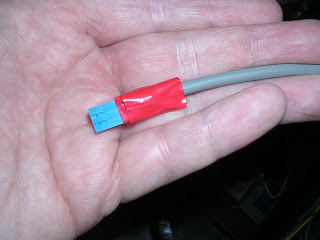 After jamming the cap in there, I just wrapped a bit of electrical tape around the whole thing. I think a piece of heatshrink tubing would have been better, but I didn't have any of the correct size.

Here's my first graph of valid PakTrakr data (click to enlarge). I'm really impressed with how well the 0.1uF capacitors cut out all the extra garbage. This plot contains several times where I punch the accelerator and pull 300 noisy amps from the batteries. I still think that the series 100 ohm resistor between the rear PakTrakr module and the front one helps, but the capacitors do the trick.

It seems the PakTrakr modules really don't like to read the voltages on the balancers when they are shunting current around the batteries. Here's what's happening in the graph:
I'm much happier now that the PakTrakr is reading non-garbage data. I can go on much longer runs and see which batteries are giving out first.

Ugh, time to get ready for the week...

Well it's about time I get the Civic working again now that the weather seems to be getting warmer. The biggest concern I have with my current system is the Batmon balancer resistors. The existing ones seem to be always on the verge of catching fire.

To replace the existing resistors while keeping the same mounting holes, I cut some 2.5"x3" rectangles of aluminum and bolted some beefier power resistors to them. 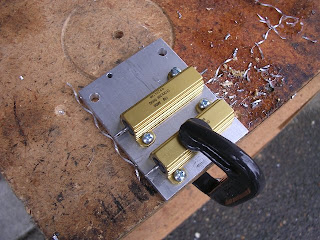 Here's the rectangle of aluminum with the larger power resistors. I'm hoping this system has much more thermal mass than the last one and can dissipate more power safely. I used a 1/8" drill and 6/32-1/2" self tapping metal screws to hold the resistors on. The two holes in the aluminum on the upper edge have the same size and spacing as the prior holes that held in the previous resistors. 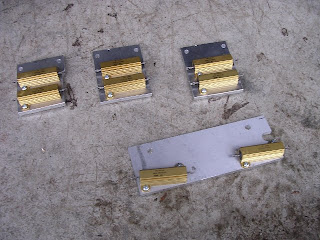 After I was all done, I had four resistor "packs" to replace. There was clearance issue with the resistors just behind the front grille, so I made a different heat-sink block (shown on the bottom in the picture) to fit the two 6mm bolt holes on the driver's side just above the grille. 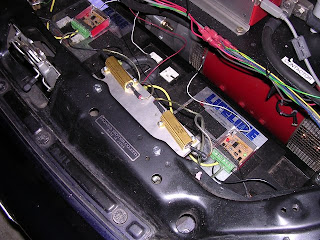 Here's the heatsink and power resistors installed just in front of the motor over one of the front-most batteries. 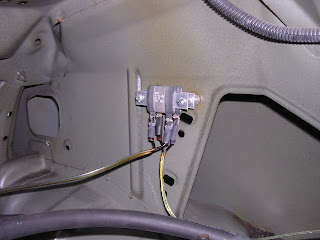 Here's the old power resistor setup. Note the discoloration on the bulkhead from the smoke and excessive heat. 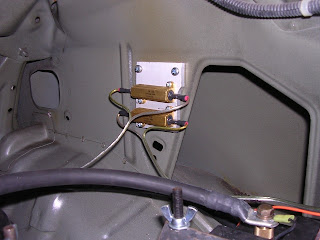 Here's the replacement setup. with the larger resistors and aluminum heatsink. 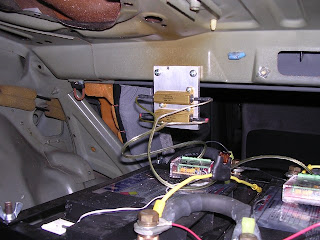 Here is yet another replaced unit on the driver's side in the rear trunk.

In addition to bulking up the resistors, I also increased the resistance from 3 ohms to 5 ohms. This won't have as much balancing effect, but I'm banking that it will dissipate enough to do a reasonable job while lowering the heat generation. If each Batmon board kicks in at 14.6 volts, my heat dissipation (V^2/R) goes from a worst case of 71 watts to 42 watts. Since the Batmon boards are actually switching on and off quickly, I should never reach the worst case situation.

The next step is to get rid of the noise on the PakTrakr lines. My series 100 ohm resistor didn't work, so I'm going to have to try a few other tricks.
Posted by TimK at 2:23 PM 2 comments: