One of the downsides of a home-EV conversion is that most of them don't have air conditioning. The AC tends to suck precious power from the battery and adds extra weight to the car while taking up space that could be used for batteries.

Thus, it's often best to get a white (or light colored) donor vehicle to repel the sun's rays during the summer. The conversion vehicle I purchased is dark metallic blue, which get's really hot inside, even on a mild day in the sun.

So I called a bunch of different car painting places to determine the cost of painting the car white. Much to my dismay, the places that got good local reviews wanted at least $3500 to paint the car. The local Maaco paint shop (which got horrible reviews) wanted $550 for their bottom-of-the-line paint option.

In short, I guess I'll be rolling down the windows and using a reflective shield under the glass for the near future. Note to self: purchase a white conversion car next time...
Posted by TimK at 9:58 AM 3 comments:

Planning to Replace the EV Components

In a month or so, I'll be getting a beta-test motor controller from Synkromotive which will have a variety of programmable features as well as more power. Since I'm replacing the controller, I looked into replacing the other components with off-the-shelf items that might work better than the current Belktronix system I have.

Here's the plan:
- replace the controller with the programmable Synkromotive unit
- replace the optical potbox with the original Civic TPS (throttle position sensor)
- replace the charging system with a bunch of individual chargers (Joule or Soneil)
- replace the integrated DC-DC converter with an IOTA DLS-45 unit 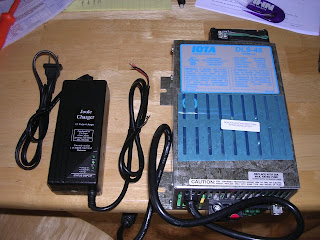 Here's a picture of the IOTA DLS-45 DC-DC converter on the right that I purchased at Northern Arizona Wind & Sun for about $150.

On the left is a jj12060 Joule individual battery charger from ElectricRider, supposedly modelled after the popular Soneil chargers. I purchased 13 of them, 12 for the batteries and one extra in case something dies or I need to charge an external 12V battery. They were out of Soneil chargers and said that the Joule was a drop-in replacement with the same specification (right!).

As is typical, things didn't go as planned. I saved this weekend for removing the old charging system and installing the Joule chargers. As a safety check, I clipped a Joule charger to one battery to observe its behavior. When I attached the charger, I heard a click (like a relay) from inside the charger. Hmm, if the battery is always powering an internal relay, then there's a constant current drain (that's bad).

In short, the Joule chargers are NOT a drop-in replacement for the Soneils and I'm going to return them and get Soneils instead.

Argh, more delays. At least the weather outside is beautiful and I can go for a hike.

Have a great weekend everyone.
Posted by TimK at 9:33 AM 1 comment:

It's been over a month since I've blogged about the Civic and people have started to ask where I've been. I'm still commuting (even with a blown charge detector) and the car has 1500 miles on it. Several events have happened with the Oregon Electric Vehicle Association (of which I'm the Chair) and I also went on vacation.

At the end of march, I went on an amazing backcountry adventure, skiing the Wapta Traverse with a 45 pound pack on with Randonee' skis. 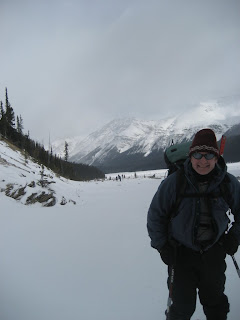 Here I am near the start of the trip. The scenery was mind-blowing. 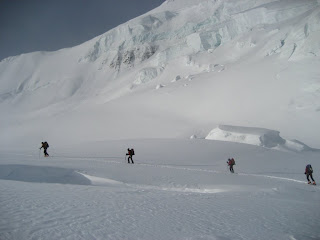 Here's the group all roped together just behind an enormous crevasse, heading up to our high-point on the trip. The picture just doesn't do this justice.

Now that I've recovered from the trip, I'll be getting back into trying to fix the charging system.

Stay tuned.
Posted by TimK at 9:24 AM No comments: