One Way to Mount the Warp9

In addition to the motor adapter to connect the DC motor to the transmission, you also need to support the rear end of the DC motor. Big thanks to Rob Connelly for providing pictures and CAD drawings of a possible "banjo plate" to support the motor. By using the beefy motor mount angle bracket from the original Civic vehicle, you can support quite a bit of weight. Thanks, Rob!

Cheers, Tim
Posted by TimK at 1:43 PM No comments:

One of the other discussions on the Civic-EV group concerns which controller to use to drive the system. Here are few thoughts:

Here is a spreadsheet that I drew up to compare some different systems.

I received good feedback from Rob C., on his experience with the Belktronix system. It's made locally in the USA and has good tech support. You can't beat the price and it handles the automatic balancing of the 12-volt AGM batteries. The minor downside is that the charger is limited to 1200 watts. This makes it good to plug-in anywhere, but can increase the charging time. Since I'm shooting for an entry-level system that's easy to use and install, I'm tending toward the Belktronix system.

Have a great weekend, everybody!

Cheers,
Tim
Posted by TimK at 1:23 PM No comments:

The original CivicWithACord design used 18 8-volt golf cart batteries. These are commonly used in the EV community since they are widely available and have been used for several years. After some debate on the Google Group and dealing with clutch-link interference issues, I'm tending towards 12-volt group-31 AGM batteries for the initial design. I think the AGM batteries will be safer due to a solid electrolyte and the entire design might be cheaper because we won't need acid-proof battery boxes.

At first glance, I was really tending towards using the Deka 9A31 batteries. They were cheaper than the Optima group 31 batteries, put out some good current and had higher amp-hours. Only after talking with a few folks and looking at specifications did I think the Optima group-31 batteries were the better choice.

Here is a quote from Mark Freidberg from the OEVA:

Hi Tim,
I've been disappointed with the Dekas and won't be purchasing anymore. Their capacity has fallen off after little more then 100 cycles even with careful charging. One thing that is nice about the Soneils is that one battery at a time can be replaced instead of the whole pack all at once. And the Paktrakr has allowed for careful monitoring on discharge to see which batteries fall off first. Four of the Dekas have been replaced by Odyssey PC2150s. Its too early to tell how much better the Odysseys will prove to be.
The other Group 31 size AGM to consider is the Discover EV31A-A. So far rumor has been that they have been holding up well but its still early in the game as they are still pretty new on the market.
All the AGMs and Gels I've tried though are stinky on the discharge, if not as much as golf cart floodies. So thats disappointing. As stinky is another way of saying not healthy to breathe. My battery box has an exhaust fan, but still its an imperfect setup. IMO, its good to have batteries separate from the passenger compartment like a truck or sedan, and/or to have non/low-toxic battery chemistries like li-ion.

After comparing specifications on the Deka 9A31 and Optima 31 batteries, it seems like the Dekas only have a cycle life of 150 full discharges while the Optimas have a cycle life of 350 full discharges. The Optimas have a slightly shorter amp-hour range but could last twice as long and put out more current. Since both batteries are group-31, I'll try to make the battery racks fit both and have people choose their own group-31 battery.

Using 12-volt group-31 batteries also enables the use of the Belktronix controller system and doesn't interfere with the clutch slave cylinder like the 8V golf-cart batteries do.

Rob Conelly provided the following picture of how the Optima 31s are placed in his system. I assume there's still six in the rear trunk for balance. 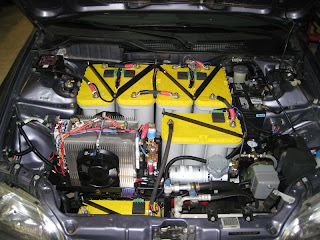 Rob's system has air conditioning and the original power-steering pump tied to the rear shaft of the Warp9 motor. For the initial open-source design, I'm planning on using manual steering and not having A/C to save range and complexity. I'll see if Rob is willing to share his battery rack design.

Next up: Controller choices
Posted by TimK at 12:39 PM No comments:

After some significant debate at the Civic-EV Google Group on whether to use a clutched or clutch-less system, I'm going to pursue using a clutched system for the initial revision of this kit.

Here are some points I considered:

Clutched system for Civic:
Clutch-less system for Civic:
With the clutch-less system, I would have had to order the shaft adapter from EV-America and then machined the outline for my own transmission adapter. With a clutched system, I just order the shaft and transmission adapter from Electro Auto and everything is just done. While the design of the shaft and transmission adapter is not open-source, there are many other parts (like the DC motor) that aren't open-source as well. Perhaps in the future, I can make an open-source adapter design, but I've found that the money saved in machining one's own adapter is small compared with the hassle of getting a local machine shop to do the job right. 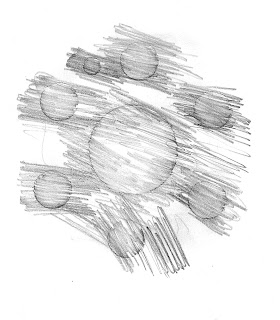 Remember the transmission I pulled out of the Civic at the wrecking yard? I cleaned it up so I could get some measurements on it for the clutch-less system. I can verify the ElectroAuto adapter on this, but I won't need to measure it anymore since I'm not considering the EV-America clutch-less system for now. 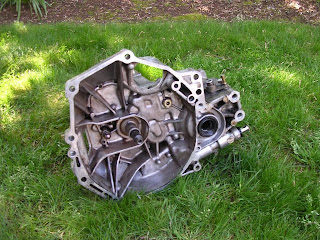 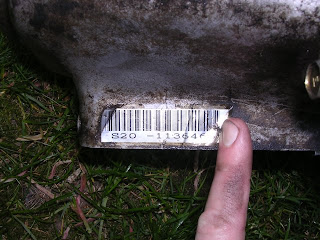 Next up: thinking about batteries and the controller system...
Posted by TimK at 12:18 PM No comments:

I had a great time in Italy for the past month exploring all the historical ruins of several cities. Vacation is over, and I'm happy to be back in the saddle doing EV conversion research for the open-source project. The Civic-EV Google Group grew quite a bit while I was gone and several people have come out of the woodwork to help with this project, so I'm psyched to move forward. 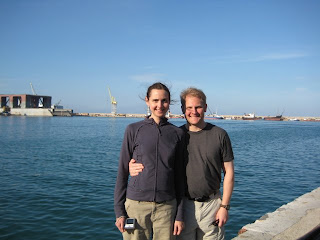 Here's a picture in the bay of Naples with my wonderful girlfriend, Krista. We're still recovering from jet lag, but we still have the weekend to recover.

Stay tuned for future posts. Things are starting to gel a bit more.