Measuring Potboxes and Ramping Up

My internet connection at home has been down for the past three days, so I'm going to blast out several blog entries today. Due to a conjunction of several events, things seem to be ramping up very quickly with the Civic project. My employer is "strongly advising" we take next week off on vacation, so I think I'll take the leap and start tearing into the Civic. I advertised the Civic engine on Craigslist and found a buyer once the engine is removed, hopefully next week.

Regarding mounting the battery boxes, I had a discussion with my colleague Ian over lunch and we agreed that we could probably bolt the boxes to the Civic chassis and not have to weld everything as long as the bolts were beefy enough. The current plan is to weld together the top and bottom battery rack frames, but use bolts to allow people to custom mount them in the trunk.

In a side experiment, I wanted to see if I could use the Civic TPS (throttle position sensor) on the intake manifold to act as the potbox for the system. Typical EV potboxes range from 0-5K in resistance. 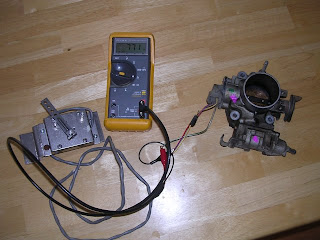 Here's my resistance measurement setup. On the left is a Curtis PB-5 potbox that I purchased from Bob Bath. On the right is the Civic throttle valve with TPS mounted on the side. The PB-5 potbox ranged from 1 ohm to 4.88K ohms. The Civic TPS ranged from 771 ohms to 4.44K ohms. Having 771 ohms at closed throttle is problematic because the controller will think the user is pressing the pedal down about 15%, so it will probably fail to initialize properly.

One of the problems people have in the EV community is that they can't get the throttle cable to move the potbox through it's entire range. One project I'm considering working on after the basic car is done involves an electronic potbox which allows the user to alter any input range of resistance or voltage into the full 0-5K resistance swing required by most of today's EV controllers.