Today was a bit slower since I didn't get much sleep last night and I helped my friend Andrew diagnose a bad brake drum on his truck this morning.

For the most part, today was the last day of removing parts from the car. From now on, it's all about engineering new parts and installing pre-built ones to make the electric car. 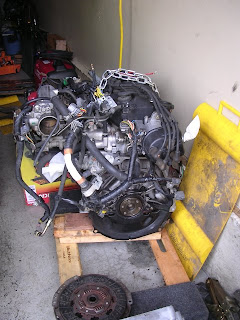 Here's the engine that we removed yesterday. I ran out to Sears (only six blocks away) and got the proper 17mm 12 pt socket to remove the flywheel bolts. This is the engine without the flywheel, ready to sell.

I spent most of the day tearing out unneeded parts. On principle, I also ripped out the three fuel lines going towards the rear of the car to the gas tank. This was a pain since they are routed together with the two rear brake lines, so I had to be careful not to damage things. 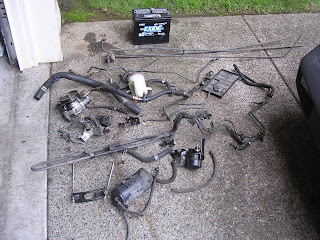 Here's a picture of the carnage and removed guts. Let's see, we have the following: 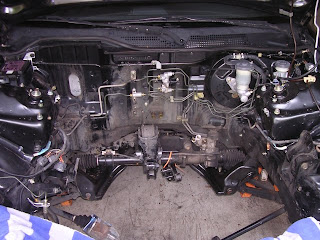 After removing everything, this is the cleared out engine compartment. Notice that the only metal fluid lines on the firewall are the brake lines and the clutch hydraulic line. There's still quite a bit of dirt on the engine compartment walls that the steam cleaner could not reach due to the engine being in the way. 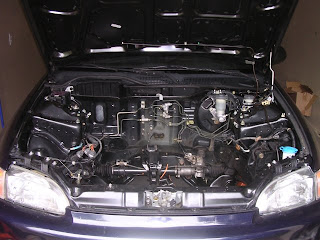 Here's the same picture after I took sponge and soap to the walls. While it's not completely spit-n-polish, the engine compartment is surprisingly clean, which is one thing people tend to notice a lot in EV conversions.

With things cleaned up, I started to work on figuring out the power steering system. After reading up much on the internet and studying the Helms manual, I tried the following trick: 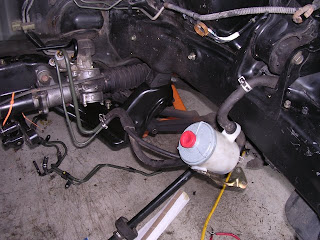 The left-over power steering fluid reservoir has three hose connection points on it. The two smaller ones are the fluid return from the power steering valve. I'm going to try and route the thick pipe from the reservoir into the steering valve high-pressure intake. Most of the fluid is drained out of the power-steering system, so it actually pulls in air and moves air around to reduce the force needed to turn the wheel. To make way for other EV components, I'm thinking about mounting this reservoir down low, underneath the batteries. This frees up quite a bit of space and clearance where the power-steering lines used to be for batteries and other EV components.

Just some details about the above picture. There are three hydraulic connections on the power steering valve (upper left in picture). The two on the left return power-steering fluid to the tank while the one on the right is the power steering pump high-pressure input.

Some people just loop-back the return line(s) back into the high-pressure inlet to allow driving without a pump. However, the power steering fluid is thick causes difficultly in turning the wheel without the pump assists. By routing all lines to a reservoir, power-steering fluid comes out of the system but only air goes back in. The air is much easier to move around and thus, makes the steering much easier. 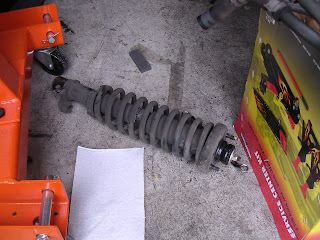 One other task for this project is to upgrade the suspension to handle the extra weight of the batteries. With the forks and ball joints removed from the front suspension, all I had to do was unscrew the brake lines from the shock/spring combo and it becomes easy to remove after undoing the nuts on the top of the shock tower.

While I might be able to do it myself, I plan on taking these spring/shock combinations to a local suspension shop and have them replace the springs with whatever I order. If I had upgraded the suspension before disabling the car, that would have worked as well.

Cheers! Talk to you tomorrow.
Tim
Posted by TimK at 4:55 PM

Tim, I have a coil spring compressor that I rented from AutoZone. I'd be happy to disassemble those struts for you before I return it!

How much did you sell the engine for?

I sold all the gasoline components (engine, gas tank, exhaust) to someone for $250. I just wanted to get rid of the stuff.