Getting Rid of Stuff

After removing all the gasoline based components from the car, my garage was pretty full of stuff. 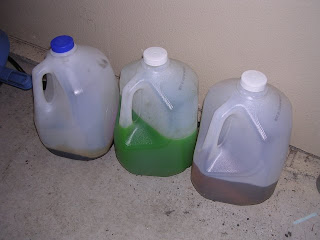 Here are the leftover fluids from the car. Left is power steering fluid, center is coolant and right is contaminated gasoline with bits of everything in it. Fortunately, Portland has a great city recycling program and they take home hazardous waste for free (up to five gallons). If you're near Portland, call their recycling hotline (503-234-3000) and they'll tell you exactly where you can take all your old stuff. If you have old auto parts (like a gas tank), you can also drop them off at U-Pull-It. 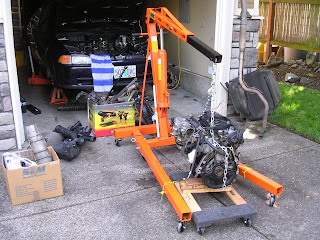 Here's the pile of stuff that I removed from the Civic that's worthless now. There's the engine on a hoist, all the air intake ductwork, the fuel system, the exhaust system, the starter, power-steering pump and a bunch of other stuff. 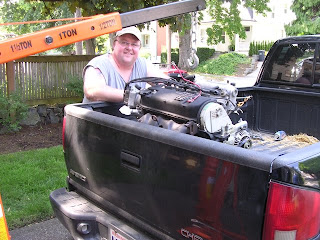 This is Dave, who answered my ad on Craigslist for the Honda Civic engine. He has an old beat up Civic that needs several parts, so he was happy to take everything away for a package price. I'm so glad to have space again in my garage to work. It feels like a huge release after purging all that gasoline-based stuff. Dave is a machinist and was fascinated by the adapter plate and shaft coupling from Electro Automotive. We went for a quick spin in the electric 914 and had a blast.

Thanks, Dave, for taking away all my crap.

Next up: wrestling with the wiring harness. (aka: the "snake")
Posted by TimK at 5:07 PM