Finishing the Firewall Rack Base 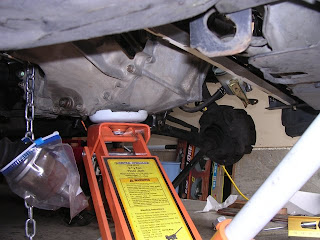 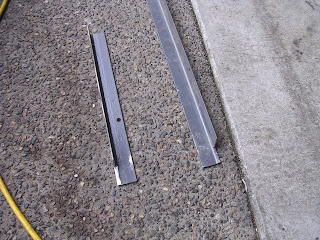 Initially I had two 2" pieces of angle iron (1/8" thick) for the left and right supports, but I found out that they were too big and interfered with a bunch of brake lines. I reverted back to 1.5" angle iron. In order to properly bolt into the 8mm holes at the rear of the engine compartment, I needed to take off 1.5" of vertical wall from the ends to allow the bolt head to fit. 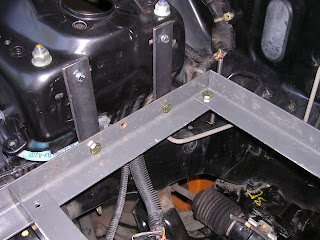 This is a picture after all the drilling has been done and the 3/8" bolts have been installed.

The vertical bars attached to the shock towers have 6mm holes drilled in them and I used 6mmx20mm bolts with lock washers to hold them in. The vertical bars are 1.25" wide and 6" long. The bottom holes in the vertical bars will be drilled after aligning the left and right support bars of the battery rack.

The rear end of each support bar is 2 3/4" above the chassis and is currently supported by 8mm all-thread with nuts that fits nicely into the 8mm hole. I'm going to replace this in the short-term future by adding a 8mm by 90mm bolt that goes through the hole in the support bar, through a 2 3/4" pipe and screws directly into the 8mm threaded hole in the chassis.

With the rear end of the bar at the right height, the front end of the bar needs to be raised so the bar is level. I used small clamps to attach the side bars to the vertical straps on the shock towers so I could verify placement before drilling any holes. 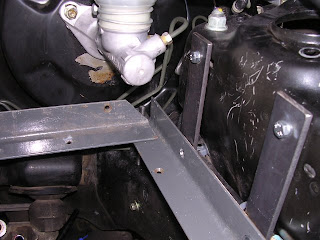 Here's a look at the right support bar holding up the rear support bar. I had to cut out a triangle of metal to prevent any of these bars from rubbing against the brake lines. 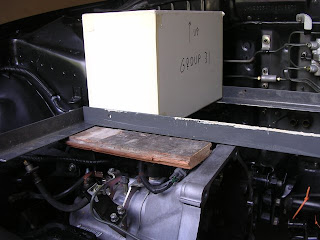 Getting the firewall rack right is difficult due to the tight clearance between the top of the transmission and the underside of the hood. With the rear of the rack 2.75" above the 8mm threaded holes in the chassis, the front support bar should just barely clear the top edge of the transmission. I've used a piece of wood here to make sure the rack is level before marking any holes for drilling. 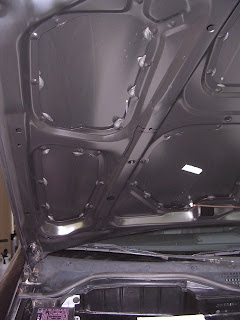 Alas, even with very little clearance above the transmission, the group-31 foam-core battery interferes with the underside of the hood. If you click on this picture to zoom in, you'll see that I've marked a section on this diagonal support on the underside of the hood that needs to be removed in order to let the hood close without battery interference. I'll have more pictures of that later. 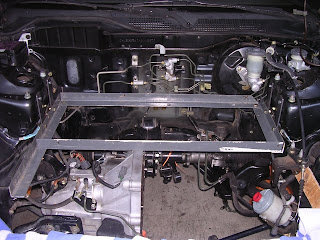 With all the holes drilled and 3/8"-16 by 3/4" long bolts installed in all the holes, the base of the firewall rack is mostly done. I can stand on this and shake quite violently and nothing seems to move. It better not, since it has to hold 280 pounds of batteries.

Since the clearance with the underside of the hood is so tight, I'm going to have to replace the 3/8"-16 x 3/4" bolts on the left support with countersunk bolts so I don't raise the batteries any further. There's simply no room left. Ugh.

Next up: trying to get the power steering reservoir in place...
Posted by TimK at 10:27 PM

Since you're looking at cutting into the structural support of your hood, have you considered a lightweight hood replacement (fiberglass or carbon fiber)? You'd eliminate a potential electrical short path (metal hood), save yourself some precious weight and they may even clear your batteries without further modification.

Thanks for the comment. A few people have suggested this. The kit is targeted for a budget-minded conversion, so I'd like to see if I can modify the hood to work. A carbon fiber hood is at least $400, so that makes things a bit pricey. If I run into major problems, I'll probably go with it. Cheers, Tim