Hoisting Out the Engine

My buddy Andrew came out this morning to help get the engine out. 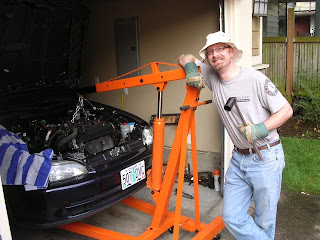 Here's Drew, happy to use an engine hoist for the first time. 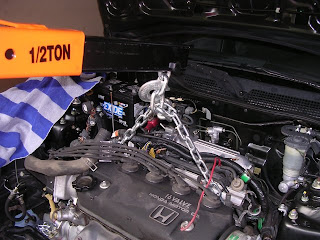 To get enough clearance to lift out the engine, you need to open the hood as far as it can go. I've doubled the engine hoist hook back on itself to allow for more lifting space. 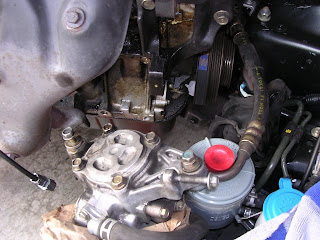 While following the instructions in the Helms manual, I couldn't get the long rod out of the driver's side front engine mount, so I removed it completely. 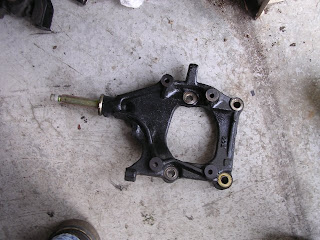 Here's the drivers side front engine mount on the floor. The long pin on the left which fit through the rubber mount was interfering with the chassis. 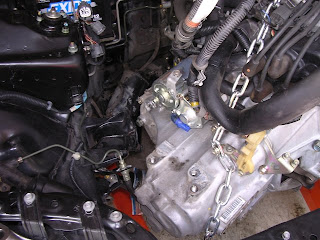 We had to slightly rotate the engine counter-clockwise (as you look down) so that all the pieces would clear. 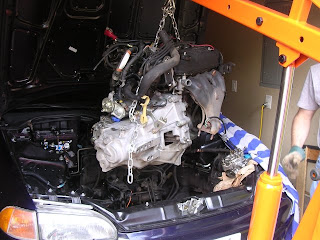 With everything clear, the engine lifts out easily. 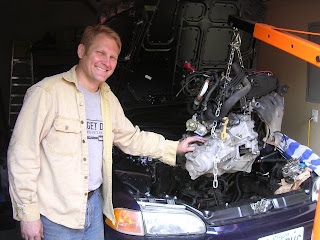 Here I stand, much cleaner than yesterday, happy to get this gas guzzling monster out of the car. 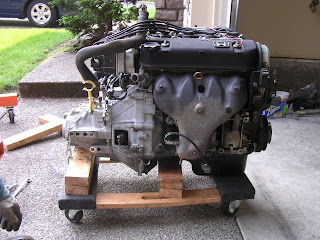 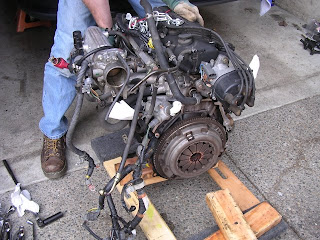 Here's the exposed flywheel (rather rusty) after we wiggled off the transmission. 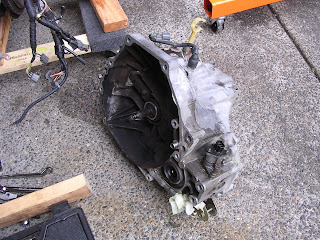 Here's the transmission. It looks like there's quite a bit of clutch powder coating the inside of the bell housing. At least it's not oily, which indicates that the main shaft seal is probably okay. 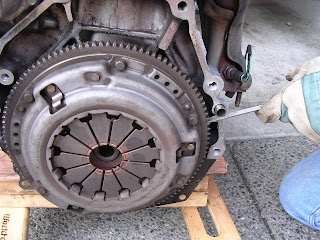 To remove the clutch pressure plate, Drew used a flathead screwdriver has an impromptu flywheel lock while I wrenched off the bolts. 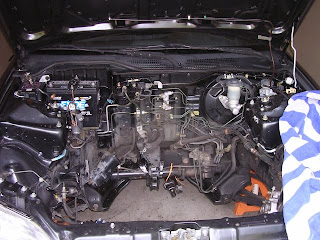 Here's the empty engine bay. Later in the day, I removed the charcoal cannister, the fuel filter, several brackets and other things. 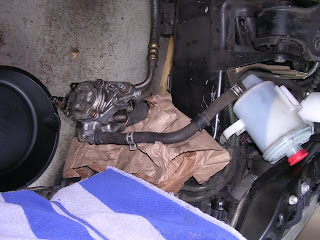 Here's the start of removing the power-steering system. The Helms manual has you drain the power steering fluid by running the engine with one of the hoses in a bucket. Wait a minute! There's no engine anymore! I guess I'll just drain what I can by taking apart the hoses.

The link covers how to do this for an Acura Integra, but similar concepts apply to the Civic. The trick with the Civic is that it has three fittings for the power steering fluid instead of two (like the Acura).

After studying the Helms manual, I'm going to try and get a "T" fitting to route the power steering return path into the high-pressure supply input and see how that works. I'll try to add a reservoir like the link above suggests to allow the system to breathe. Worst case, I can replace the power-steering rack with a manual one. The replacement probably wouldn't be that bad since I already have the engine bay cleared out. 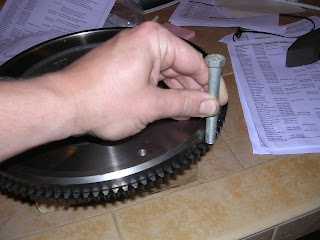 One easy way to lighten up your flywheel is to knock the teeth off of it. Electric cars don't have starter motors, so they don't need the teeth. For the stock Civic flywheel, the teeth are just pressed onto the circumference of the flywheel.

Here I've placed the flywheel (teeth down) on top of two short 4x4 blocks and am using an old bolt with large hammer to work my way around the edge, knocking the teeth slowly off. 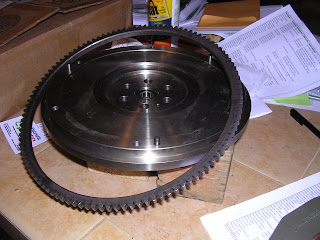 After about fifteen minutes of hammering, the ring popped right off. Several internet links describe how to put the toothed ring back on using your freezer to shrink the flywheel and the oven to enlarge the tooth ring.

Next up: removing the unneeded fuel lines and trying to figure out the power steering "T" fitting for manual operation. I might also clean up the engine compartment with a toothbrush.
Posted by TimK at 10:05 PM