Whew! I think I finally broke some inertia and got moving forward a bit. One thing that helped is that I got an old square box that I can use as a tiny workbench out in the driveway. I can clamp things to it and work without bending over or kneeling on the ground. This makes a huge difference in the ease of my drilling and hack-sawing.

One of the problems I've noticed with the front battery rack is that the side supports extend too far back and interfere with the transmission support and the rear end of the Warp9 motor. I decided to saw them short and adjust the side support struts for the shorter length. 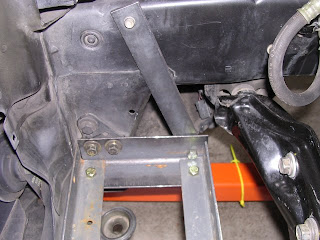 Here is the passenger side end of the front rack. The original version was about three inches longer and it extended under the black transmission support on the right. This would have prevented easy lowering of the transmission/motor assembly. Initially I was concerned that the
bolt head would protrude too far into the rack, but I realized that the two front bolts holding the tow bracket in protrude further, so this wasn't an issue. 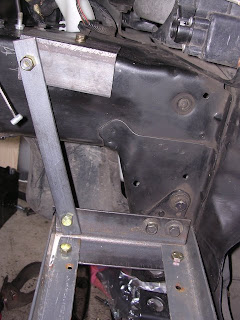 Here's the same shortening of the side support for the driver side of the car. The support strut on the left was vertical before and is now slanted to bolt into the shorter side piece. 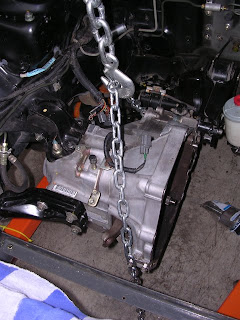 With the front rack re-designed, I now have to remove the transmission in order to bolt it to the motor and figure out the blockages inside the engine compartment for the whole assembly. 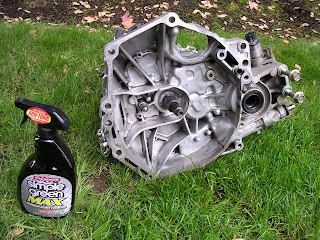 The transmission still had loads of dirt, oil and clutch dust inside of it, so I cleaned it out with Simple Green MAX. I was very surprised at how well this cleaner worked. Just a few sprays and a scrubbing with a wet sponge cleaned most everything out. I avoided using a water hose to prevent water from getting into the transaxle. 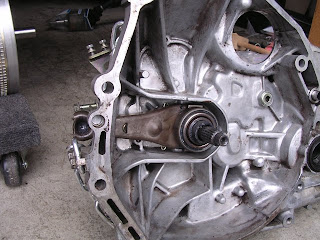 After cleaning up the bell housing, I wiped all the goo off the throw-out bearing and arm, re-greased them and put them back in.

Next up: Attaching the flywheel to the motor
Posted by TimK at 3:37 PM