Blockages from the Motor/Transmission

After attaching the motor to the transmission, I attempted to install the whole assembly in the car to find any issues. 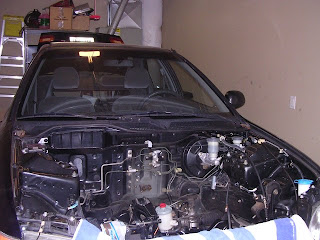 One thing I should have done a long time ago was remove the hood. Don't forget to disconnect the washer fluid hose before you remove it. This allows much more engine hoist room and lets more light in when I'm working at night in my tiny garage. 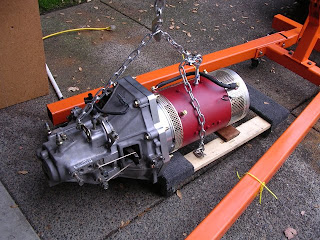 Here's the motor/transmission assembly. I inserted a 1/2" bolt into the mounting hole on the motor and attached the hoisting chain to it with a bolt, two washers and a nut. The other end of the chain attaches to a bolt on the transmission just slightly behind the shaft center. This allows the whole assembly to rise without tilting too much in any direction. I found the particular link on the chain that allows the hoist to raise the assembly in a balanced position and marked that link on the chain with a permanent marker.

I had to orient the motor/transmission assembly on the furniture dolly lengthwise to allow the engine hoist legs to get around it. 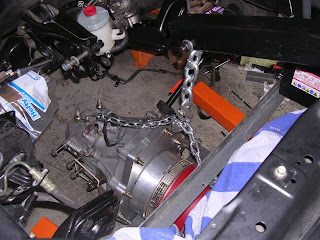 After verifying the lift characteristics outside the car, I rolled the furniture dolly under the raised front end of the car and lowered the hoist into the engine compartment to pick it up at the link I marked on the chain previously. 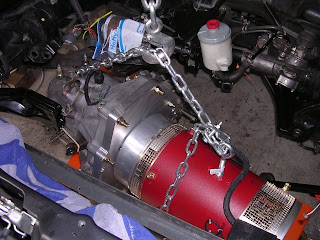 After slowly raising it up, I could rotate the whole assembly on the chain to get it into the correct orientation. After some maneuvering, I was able to get some of the transmission brackets attached. 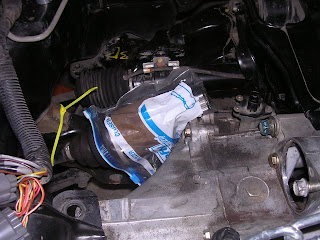 Whoops! In order to give myself more space to work, I had tie-wrapped the passenger-side drive-shaft joint to the frame to get it out of the way. Now it's wedged above the transmission and I'm unable to lower it back down. After unbolting the transmission brackets and lowering the whole motor/tranny assembly, I was able to move this drive shaft out of the way. 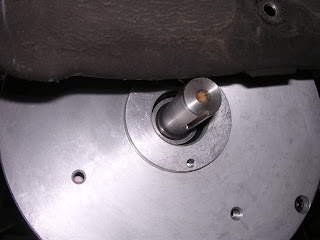 After raising the whole assembly again and bolting in the transmission mounts, I found that the tail shaft on the Warp9 motor hits the chassis on the tail end. I wanted to get the motor in place so I could properly design an end-plate for the Warp9. With the end of the motor so close to the chassis and the tail shaft hitting, this will prove somewhat difficult. I'm debating whether to cut into the chassis (possibly weakening it) or cutting off a significant portion of the tail shaft. I don't really need it except to add an RPM sensor, which only requires about a 1/4" of shaft to attach the magnets to. 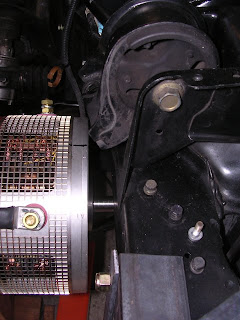 Here's a closeup of the tail end of the Warp9 motor. The rear edge is within an inch of the chassis frame, so things are going to be tight. Attaching the rear end support plate is going to be very tricky without removing a good part of the tail shaft. 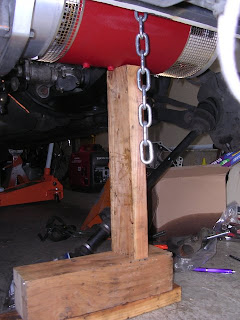 Since I have to stow the engine hoist and it tends to "sag" over time due to the hydraulics, I put some 2x4 supports under the motor end of things to hold it in place. The transmission mounts are very sturdy and prevent the motor from moving left-to-right and front-to-back, so I just need vertical support. I would have rather used a jack-stand, but I think this will work for the moment as long as I'm careful.

Any votes on whether I should shorten the tail shaft or cut out a small piece of the chassis are welcome. If I cut down the tail shaft, I won't have to upset the structural integrity of the chassis and it will be much easier to bolt on the rear support plate. The downside is that the motor will be less valuable without a working tail-shaft in case I want to re-sell it.

Next up: designing the support plate for the rear end of the motor.
Posted by TimK at 10:52 AM