To finish up the suspension, I installed the rear coil-overs. The procedure is much the same as the front coil-overs. 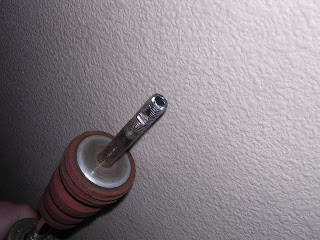 When the guys at Les Schwab swapped out the rear springs for the cut-down front ones awhile back (see this post), it looks like they chewed up the shock end pretty bad. I had to go to Auto-Adventure and buy a used shock. The whole assembly was only $30 and they have tons of used Honda and Subaru parts.

After following a similar procedure to the front coil-overs, the rear ones were in. For the rear height adjustment, I left six threads *above* the top edge of the gold ring instead of six threads below. The car is still sitting about 1/2" high, so I'll probably lower it a bit later.

Next up: reports for the first week of commuting.
Posted by TimK at 7:37 AM