My First Week of Commuting

This has definitely been an interesting week. With the front suspension coil-overs installed, I felt much more confident in driving the car around without bottoming out. The link-10 is pretty good at measuring state-of-charge with Peukert compensation, so I felt good about knowing how much juice I had left.

I commuted to work three days this week (Monday, Tuesday and Thursday). It's 17 miles one-way with charging at work. I lose about 40% of my battery charge (DOD) in one direction which is what I was hoping for. Warmer weather might make this even better.

Things seemed to go fine on Monday. I left the charger on float-mode to make sure I didn't cook the batteries.

Tuesday was interesting. I woke up and found that the 1 amp fuse had blown on the 7watt DC-DC converter for the link-10. I replaced the fuse and the system worked again. Must be a glitch. I had some errands to run after work and the link-10 showed that I had 55% battery remaining when I started the errands, so I thought I was okay.

Around 48% remaining, the LVP protection on the Belktronix system kicked in and the car slowed to a crawl of 15-20 mph. I did what many EVers do: I pulled over, waited 15 minutes and then drove the remaining mile home. After waiting the 15 minutes, the car felt a bit better, but after 1/2 mile, it slowed to a crawl again, so I put on my hazard lights and got home. Trying to signal to change lanes with your hazards on is interesting.

I let the battery sit for 1/2 hour and measured the standing voltage on all the batteries. All showed 50% charge remaining except for one (tied to the IsoBatMon) showing %45 remaining. I'm guessing this one battery tripped the LVP (low-voltage-protection) signal and slowed the car down. To more quickly balance the pack, I put a 12V charger on the low battery at 30A for 25 minutes and then charged the car. I didn't want to get stuck like this again, so I installed an override switch for the LVP circuit going to the main controller. 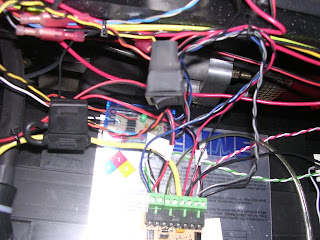 Here's the override switch (top center). It's attached between the IsoBatMon unit and the motor controller. This enables me to see the LVP indicator on the dash if I need to put the system into override mode. Hopefully, I'll only have to use this for limping home.

Tuesday evening, I also started swapping out the rear suspension and found the chewed up strut (see previous post), so Wednesday, I commuted with the 914 EV and went out to purchase the new strut. Wednesday evening I finished the installation and made sure the Civic was charged for the Thursday commute after going for a run ride with my friend Andrew.

Thursday morning, I noticed that the 1A fuse for the Link-10 DC-DC was blown again. I replaced with a 2A fuse. I also noticed that the car was filled with a burning smell. I didn't figure out what this was until I was on my commute to work. It was the smell of overheated resistors, specifically the bypass shunt resistors for the batteries.

After arriving at work, I plugged in, knowing that the charger was in float mode and went to work. I drove home without a problem, did some errands (and opportunity charged with an extension cord to prevent the LVP "crawling along" problem) and went home.

This morning (Friday), I noticed the burning smell again and did some closer inspection under the hood. It turns out that the charge detector malfuntioned again (perhaps by the 30A battery charger?) and I've been dumping 8 amps of current into the batteries, even when full (argh!). All the bypass resistors had become discolored from over-heating.

I'm taking the Civic to the line-up shop this morning to fix the right-side CV joint (i.e. replace the axle) and do an alignment. I'll ponder what to do next at the shop...