Rotating the Brushes on the Warp9 Motor

Many people don't realize that the Honda crankshaft going into the transmission actually turns clockwise for the forward direction, as opposed to counter-clockwise for the vast majority of cars. As such, most EV motors have advanced timing on the brushes to optimize counter-clockwise rotation. Since we have a Honda Civic, we're going to rotate the brushes on the Netgain Warp9 motor so that they have optimal advanced timing for the clockwise direction. 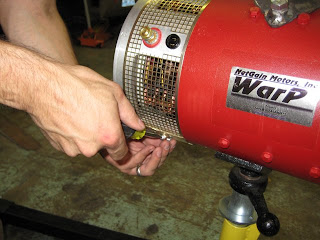 The first step in the process is to remove the protective grating from the rear end of the motor. 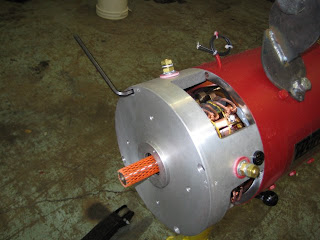 The next step is to remove the four allen-head bolts that hold the rear motor housing on. 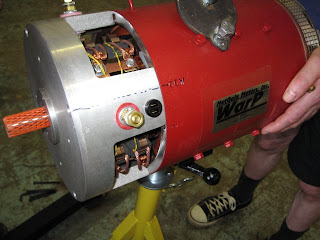 Note that the allen-head bolt hole lines up with the "CCW" (counter-clockwise) mark on the red motor housing. I drew a line here at the CCW mark so we know how far to turn the motor. 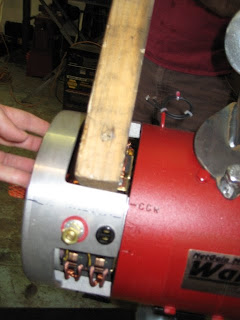 We then use a 2x4 and small hammer to rotate the rear-end housing so that the black pen line (formerly on the "CCW" mark) is now on the "CW" (clockwise) mark. Here we have tapped the end housing almost to the "neutral" or no-timing advance position. 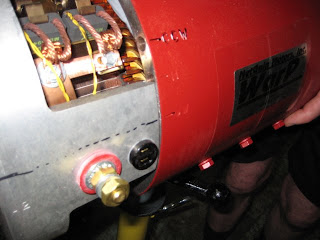 On a side note, there are two quick-disconnect terminals the black connector just to the right of the main electrical connection bolt in the picture above. These two terminals are tied to the end of the brushes to auto-detect when they are getting low. I don't know the best way to measure this, but I'm sure I'll figure it out. 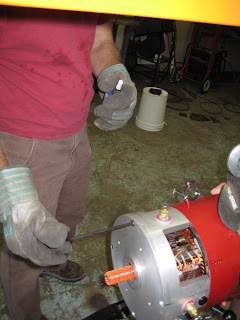 With the brushes rotated to the proper "CW" (clockwise) position for the Honda Civic, we use blue loctite and insert the allen-head bolts back into the motor. I didn't know how many foot-lbs we should have tightened these to. Update: Netgain motors has mentioned (see comments below) that these should be torqued to 35 ft-lbs. 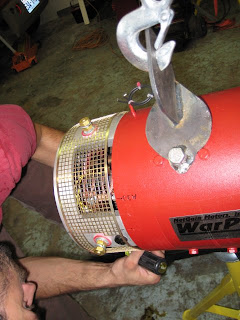 And finally, we re-attach the protective grille to keep large rocks out of the motor brushes.

This whole setup was suspended from an engine hoist and supported on a stand; however, I'm guessing most people would just sit this on a furniture dolly or crate and work with it. Interestingly enough, the ADC 9" motors come in a crate and the Warp9 motors come all bundled up in a large cardboard box on top of a pallet.
Posted by TimK at 3:25 PM

You'll have to rig the short brush sensor to the "check engine" light.

What a great project! I'll be checking every day to see what happens over the weeekend.

The bolts into the end bell should be torqued at 35 ft lbs. I should ad that to the documentation....

great photos showing how to change the timing!