Replacing and Saving the Aux Battery

Well, the car's back on the road again. Yay! I replaced the 12V auxiliary battery (a group 30 motorcycle battery) and got a 2 year warranty on it just in case.

I remember in the past, I fully drained my 12V accessory battery at least twice by accidentally leaving the headlights on. In fact, I almost did it again yesterday when driving the car over to a friend's place. The car is a bit older and doesn't have an alarm when you leave the headlights on when turning off the ignition.

To prevent leaving on the Civic headlights, I installed a piezoelectric buzzer from Radio Shack with an inline diode. 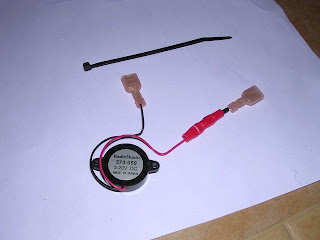 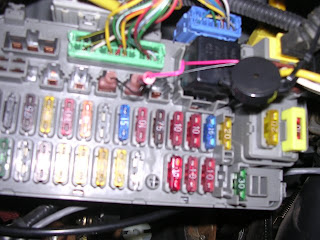 Here is the buzzer installed to the testpoints on the fuse block. I had already figured out this fuse block in an earlier post, so I knew which ones to tap into. The tachometer is gone, so I can tap into the fuse block where the tach light input was connected.

The second testpoint from the right goes to 12V when you turn on the parking lights or headlights. That gets connected to the positive buzzer wire through the diode. The third testpoint from the right is the ignition signal which goes to 12V when the key is on. The buzzer only activates when the ignition key is off and the parking/headlights are on.

I hope this saves me a lot of headaches with the new auxiliary battery. With temperatures dropping quickly, I don't know if I can get to work, but at least I can cruise around town with a heavy sweater on. (still no heater in this machine... :)

How are your batteries fairing now with the PakTrakr all setup? Have you noticed any poor/bad batteries or anything acting up?

I am surprised your car doesn't have a headlight alarm. My 1996 Civic EV has a really annoying alarm that goes off with the lights on, so it's hard to miss.