Probably one of the coolest things about the show is that a Tesla Roadster showed up unexpectedly! 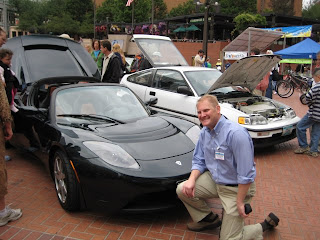 Here I am with the Tesla Roadster.

After talking about electric vehicles to people all day in the sun, I was rather fried at the end of the day.

On the way home the Sykromotive controller faulted three times during initial acceleration up a hill in the summer heat. I suspect these are temperature glitch faults that Synkromotive has been having issues with for awhile. Being fried from the show and caught in heavy traffic on a hill with lines of people behind me, you can imagine this wasn't much fun. Fortunately, I've learned that I just need to toggle to ignition key and wait five seconds to try again.

After clearing the third fault on this hill, I was able to very slowly accelerate up the hill until the motor turned enough to not cause noise issues with the temperature sensors in the controller. I'll be uploading all the fault logs soon and contacting Synkromotive for further advice. Other than the temperature faults, the controller has been excellent. This is still a "beta" unit, so perhaps they've resolved the issues. Let's hope so...
Posted by TimK at 9:10 AM

I hope you get the faults figured out soon. I am looking to get a Synkro to replace my way under powered Kelly which can't climb a hill for the life of it.

Have you tried the USB monitoring yet on it?