Against my better judgment, I took apart one of the failed Soneil chargers yesterday afternoon to see if I could find out anything about the failures. There weren't any burned components or obvious damage. After powering up the unit with the cover off, I could verify that the isolation transformer between the AC side and battery side wasn't getting pulsed, and thus passing no power to the battery (or the LED). It seems that the UC3842A chip DC-DC converter chip used to drive the FET which pulses the transformer was dead. It's power supply had a resistance of about 3 ohms to ground (bad). 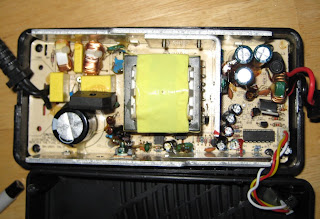 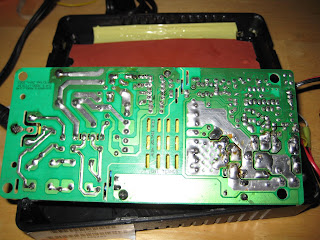 After mulling over the circuit in my head last night. I tried to compile a list of facts I know about the failure:

I'm trying to figure out the best option for now. To drive the car, I'll probably need to re-install all the Belktronix resistive shunt balancer modules. The car would be driveable but it would still take a long time to charge. I don't like the idea of hand-modifying twelve Soneil chargers, but that would probably be what it takes to get them working.

I could send all the Soneil's back and get the Joule chargers again. That is, after checking with the designer that they support 1KV of isolation. The Joule chargers draw 35mA of current when sitting there unplugged. This hypothetically translates to 2857 hours of discharge from 100Ahr batteries or about 4 months until the batteries are completely dead. If I went on a long vacation, I guess I would leave the chargers plugged in on float charge anyway. The Joule chargers also only charge with 6A, which means (despite a bad PFC rating), I might be able to plug in all chargers to a 15 amp AC circuit (The Soneils pull about 18 amps for all 12 chargers).

This is a really bad time because we have so many electric vehicle events happening now. Having a dead EV is not too appealing. I'll ponder this for a bit.

Happy Sunday morning.
Posted by TimK at 6:36 AM

I am thinking about adding some conformal coating and a fan to my Soneil plan....

Have you considered a mid-pack disconnect to reduce the possible over-voltage condition while charging? Maybe a big contactor... although that would become another potential failure point while driving.

Thanks for the idea. I see this as a bigger issue with the Soneils because they aren't truly isolated. Even with pack separated into two halves, the differential voltage might creep up to 72+170 which would be 242V. While this is under the 250V rating of the isolation caps, most designs should allow for 30-40% of guardband to increase the life of the caps. Of course, the failure mechanism could be something else, but having the caps out of spec make me concerned that there aren't other issues (possibly just an irrational customer response). Thanks again for the split-pack idea. I'll consider it.

The other advantage of a mid-pack split is that the overall voltage is lower when you are doing pack service. A minor advantage - a 12V potential difference is plenty to vaporize battery terminals and cause severe burns.

The disadvantage is if you have both a mid-pack contactor *and* a contactor in front of your controller, you may have sequencing issues with turning them on.