Removing the Fuel and Exhaust Systems

I spent most of this afternoon and evening removing the fuel tank and exhaust system. Since this part of the car wasn't steam cleaned like the engine compartment, I got complete covered in dirt and gasoline grime. 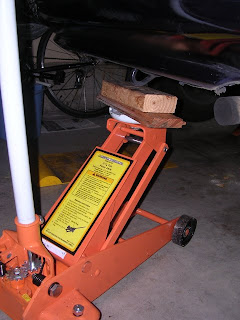 I'm using the floor jack to raise the back end of the car. If I don't use these blocks, I can't raise the car enough to insert the large 6-ton jackstands. 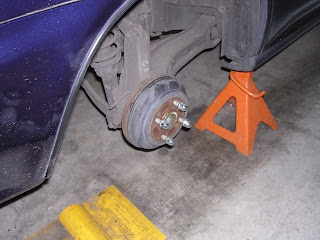 This shows the rear jack-stands installed and the rear wheels removed. Since the parking brake holds the rear wheels still, I didn't have to loosen the lug nuts while the wheels were still on the ground. Here are all four wheels gracing my front hallway (What? You don't store your tires in the house?) I need to do this since I only have a tiny one-car garage. 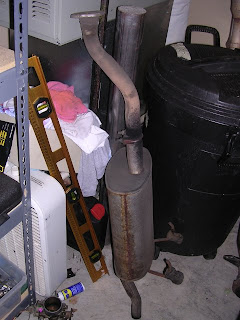 Yay, I got the muffler out without too much hassle. I pried off the rubber rings holding the exhaust system to the car so I didn't have to cut them. 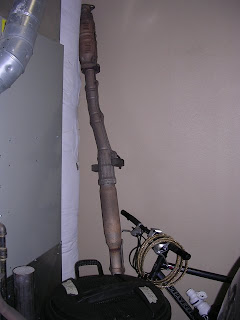 Death to the catalytic converter and the last of the exhaust system! This looks like a large bassoon over in the corner of my garage. I'm giving all these parts to the guy who is buying my engine. They passed the emissions test wonderfully, so I hope some gas guzzler can make use of them. 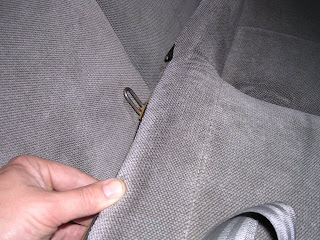 Okay, now for the fuel tank. The first thing is to disconnect the wires from the top. In order to lift up the back seat, there's a small bolt holding the seat down that goes through this ring. It was a pain to get to, but it's there. 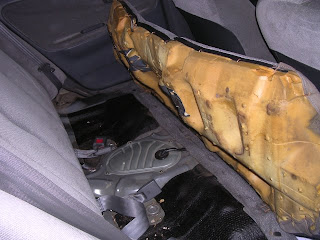 After raising the rear seat, you get access to the service cover for the fuel tank. 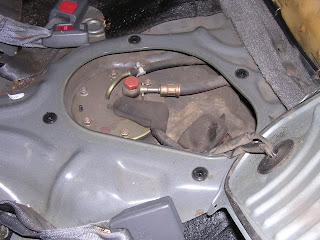 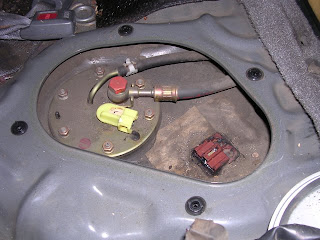 Same picture with the electrical connections removed. The red one was very gummy, but I don't know why. 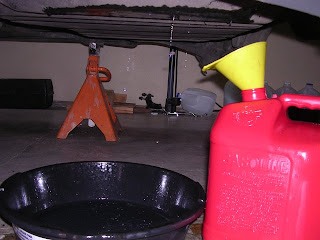 The instructions call for draining the fuel out of the tank by unscrewing the drain plug. This proved to be a big mess because the grime and surface tension of the gasoline caused it to run down the tank and all over the floor. I tried capturing this for about two minutes and then gave up. The tank only had about two gallons in it, so I plugged it back up and continued on. 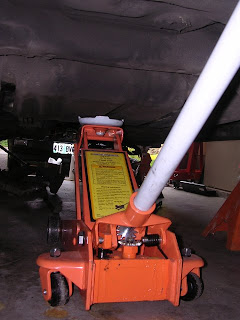 After tearing off the plastic covers for the fuel hoses and the filler line, the instructions suggest that you use a floor jack to hold up the tank while you loosen the holding straps. 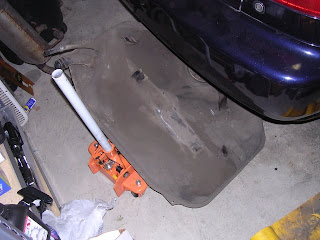 After removing the straps and filler hose, the tank lowered easily to the floor. I'll be very happy to finally get rid of this gasoline-fuming mess. 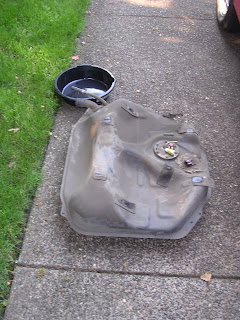 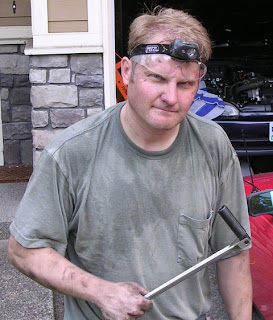 This job was actually much dirtier than I expected. There was quite a bit of dried mud caked around the fuel tank and behind the plastic hose protection shields, so it all came down on top of me when I pulled things out.

I'm looking forward to a shower.

Tomorrow: yanking the engine and trying to find a place to put it...
Posted by TimK at 8:32 PM